The Phoenix Rises: Rebirth of Realms of Fantasy Magazine 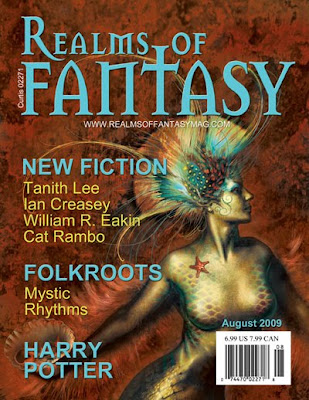 I've been a subscriber to Realms of Fantasy magazine since 1999, and so was very disappointed to learn early this year that it had been shut down. Luckily, fan mobilization on facebook and other sites helped persuade Warren Lapine, owner of Tir Na Nog Press, to purchase the magazine and save it from permanent print death.

It seems every time I turn around, I read about another magazine closing, or in some cases, shutting down print operations and only offering online subscriptions. So for this reason as well, the relaunch of RoF is welcome news.

Now on to a quick review of the August issue--the first issue since the relaunch. They have kept the same basic look to the magazine, and all of the features and columns have returned as well, including the following departments: folkroots (which covers folklore and myth), the art gallery, books, movies, and games. The fiction section includes four stories, including "Our Lady Scarlet", by Tanith Lee. One of the changes they did make is switch to a thicker cover stock and much thicker mailing cover (I'm not sure what the actual name for this is, but it's the temporary, removable cover on subscriber issues). Occasionally an issue arrives slightly damaged, so this is a welcome change as each issue should better withstand rough handling.
Posted by Jeff Ward at 10:28 AM No comments:

The Pillars of Heaven 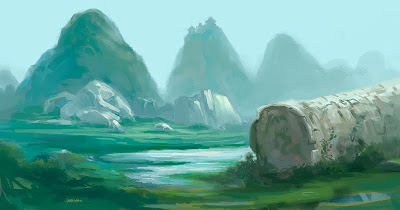 Here is another illustration for Rite Publishing's Jade Oath project.

Background information on this scene:

"In the mythology of the region, the fallen pillar of heaven was one of the supports that held up heaven and was knocked over at the beginning of time when the gods fought on the earth and caused the great flood. Stones believed by some scholars to be the remains of the fallen Pillar of Heaven lie broken and scattered across the landscape of the Empire of Xianguo stretching from the Heaven's Reach Mountains scattered along the vicinity of nearly the whole length of the Ghostwall all the way to the Sea of Burning Stars."
Posted by Jeff Ward at 6:43 AM 2 comments: