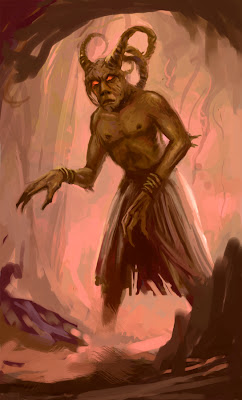 I've fleshed the creature out and, I think, improved on the design. Also added elements of the cave to the composition and increased the contrast of the image.
Posted by Jeff Ward at 4:40 AM No comments: 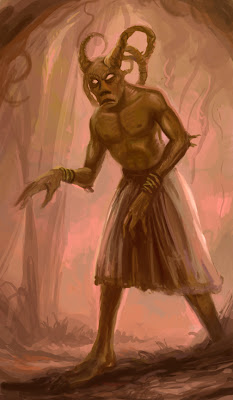 I painted this first pass in Photoshop, where I hammered out the basic design of the character and the surrounding environment and color scheme.
Posted by Jeff Ward at 7:27 AM No comments: 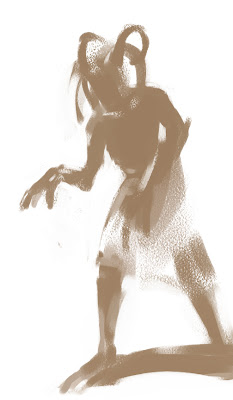 This is the first post in a series chronicling the evolution of a painting from initial sketch to final image.

So what this is is the initial sketch I did back in the second half of 2005. I roughed it out in Painter using the chalk tool. I've recently decided to flesh it out into a finished painting, painting it both in Photoshop and Painter. Since I'm much more familiar with Photoshop and it's brush engine is faster, I'll probably be painting it mostly with that software, while occasionally using Painter.

Anyway, the next post will be the character in the initial stages of the painting process.
Posted by Jeff Ward at 4:16 PM No comments: 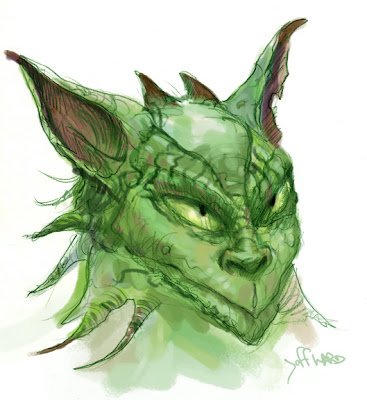 I painted this in Photoshop today from a 2003 pencil sketch. I've meant for some time to go back to that sketch and do something more with it. I may at some point paint a fully fleshed out portrait of this guy. I think it would make an interesting piece.
Posted by Jeff Ward at 8:27 PM 1 comment: I had forgotten about this one. Painted in Photoshop. Once I rediscovered it and tweaked the colors, I was suprised at how much better it worked. It was way too green and murky at first.
Posted by Jeff Ward at 12:39 PM 1 comment: